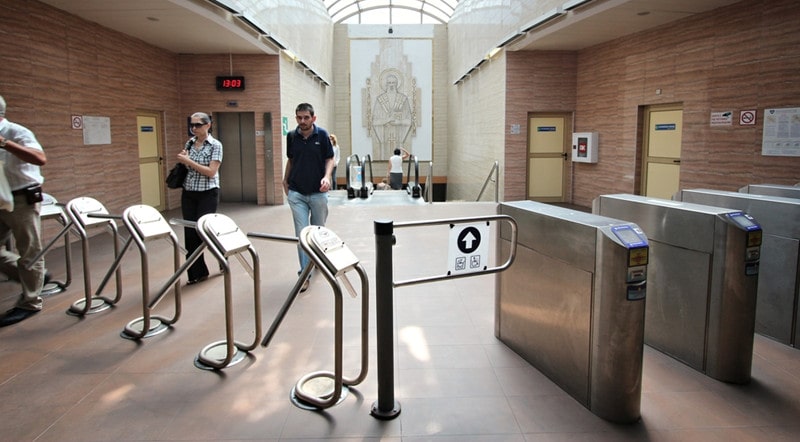 Security has always been a top priority for business owners. Traditionally, businesses relied on the expert services of security personnel. However, with the rise of technology, the need for security as well as related tools underwent several changes. In the 21st century, safety and security solutions have become increasingly computerized and automated.

Turnstile gates have become a well-known element of modern-day business security systems. You must have seen a turnstile gate at a metro station, an amusement park or a sports stadium. These gates are primarily used to prevent unauthorized entry and control public access in crowded places. However, originally, turnstiles were designed for a different purpose.

Let’s find out a little bit more about the fascinating history of turnstile gates and how their application has evolved today.

The use of turnstile gates dates back to the first millennia. Originally, turnstiles were just stiles, usually made from wood. Most farmers used these gates to pass through adjacent fields while keeping their livestock confined in one place.

It is believed that after a few trials and errors, an enterprising farmer came up with the concept of a turnstile. The very first design consisted of a wooden post installed in the ground with a moveable wooden cross mounted on the top. This design gave rise to the name “turnstile.”

The use of turnstiles in commercial outlets and business facilities began in the early 20th century. In 1913, Clarence Saunders, an American grocer and entrepreneur, installed turnstile gates in his first Piggly Wiggly store in Memphis, Tennessee. Saunders installed these systems to keep the self-service supermarket from overcrowding.

In the UK, the original Hampden Park stadium in Glasgow is said to be the first-ever public place to use turnstiles. In 1915, turnstiles were also installed at Blackpool Pleasure Beach to control the summer crowd. Thereafter, an increasing number of businesses and buildings began using turnstile gates to save money and time, as well as enhance security.

Types of Turnstiles and Their Uses

Modern-day turnstiles come in a variety of designs and offer a wide range of features, depending on their applications. Here are the main types of turnstiles.

Optical turnstiles don’t have an obtrusive entry barrier like an arm or a swing gate. They primarily use infrared sensors to detect whether or not the person passing through is authorized. Audio and visual interfaces like alarms and security cameras identify intruders. Optical turnstiles are often used indoors where aesthetics matter. These are extremely expensive.

You can use swing gate turnstiles as single or bidirectional access points. They are usually used inside buildings as they are not as secure as full height turnstiles. They are also aesthetically pleasing. You can find these in malls, shopping centers, superstores, hotels, clubs, and lounges.

As the name suggests, these are waist-high electronic entry barriers. Highly economical and effective, they are often found in public places such as sports venues, universities, retail sites, theme parks, and museums. The primary goal of these turnstiles is to control a large flow of people via integrated ticketing, building pass, and key card systems.

Drop arm or tripod turnstiles are a type of waist-high turnstiles. They usually consist of three horizontal arms, which rotate as people pass through. However, drop arm turnstiles with single or double arms are also common. You can see these in bus terminals, metro stations, parks, stadiums, and museums. They are often used in combination with an automated coin and bill acceptor or ticket checking system.

The most secure of all turnstiles, full height turnstiles look and function like a revolving door. They are suitable for high-security buildings and facilities such as embassies, government buildings, prisons, bank vaults, military bases, nuclear plants, and warehouse distribution centers. Depending on the application, you can use one-way or two-way full height turnstiles. You can operate these gates using card readers, infrared sensors, and also manually.

Turnstiles have played a critical role in making modern businesses and venues more secure. These advanced access control systems have come a long way since their use began in the first millennium. Today, you can choose from a variety of turnstiles ranging from optical systems to full height barriers.