Our optical flap turnstiles are the high-end solution, as they allow for an extremely high passage speed. Therefore, we recommend using them in high-traffic locations, such as public transport stations, ferries, as well as office buildings.

The default width of our optical flap turnstiles is 550 mm, but you can request a wider passage if you want. The width can go up to 900 mm, allowing access to people in wheelchairs, as well as people with luggage.

When it comes to the appearance of the flap barriers, you can choose red or blue rubber, as well as transparent Plexiglas. Lastly, our optical flap turnstiles come with all the infrared security features of our optical swing turnstiles. 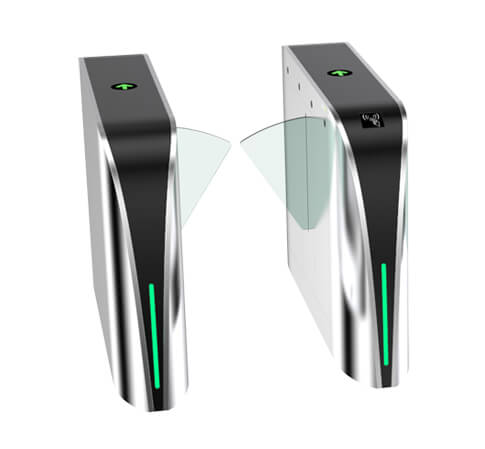 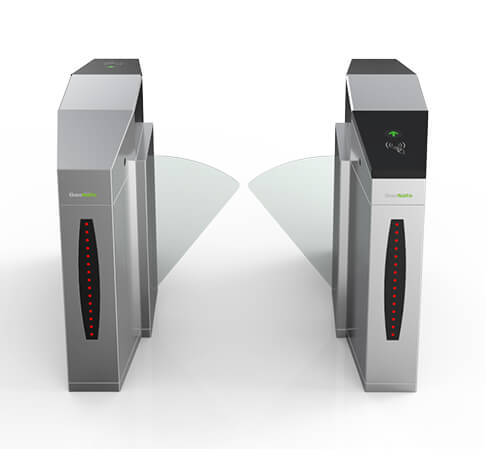 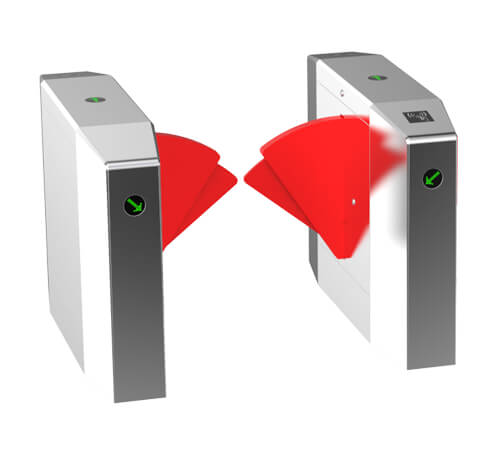 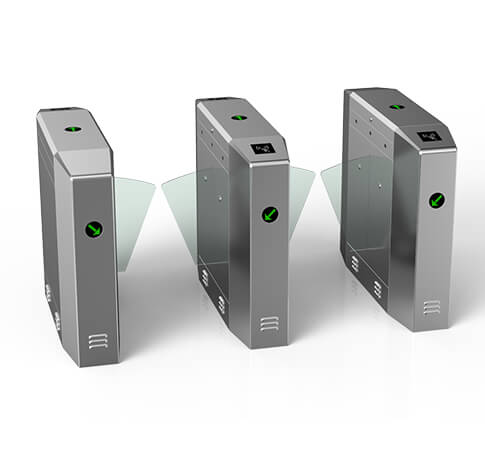 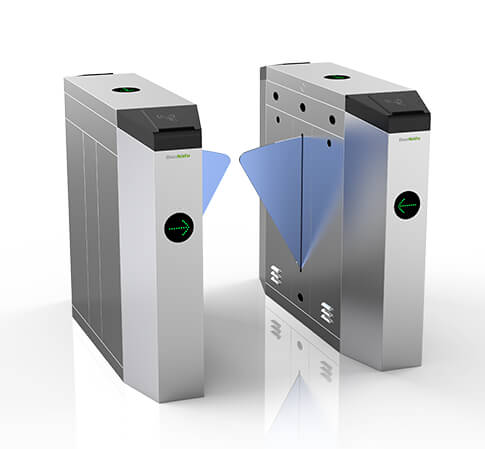 What Is an Optical Flap Turnstile?

Optical flap turnstiles are more elegant and visually appealing than mechanical tripod turnstiles. They rely on infrared sensors and alarms to control entry. In other words, they don’t physically restrain people but use audible and visual alarms to signal unauthorized entry.

These types of turnstiles are common in places that don’t need high-level security access control. For that reason, they are quite useful in places that get high pedestrian traffic. They cause less delay during entry than other turnstiles.

Also, optical flap turnstiles are durable and reliable. Plexiglas flaps, coupled with infrared sensors, ensure only one person can pass through the gate at a time. Sensors can detect tailgating, intrusions, or reverse entry. In such cases, the gate will automatically lock itself and trigger an alarm.

Depending on where they’ll be used, optical flap turnstiles can be fitted with access control devices. They usually come with card readers, barcode scanners, or coin slots. The gate can function as part of an integrated security system, as well.

If there is an emergency, the flaps will retract, allowing people to freely pass through the gate.

Optical flap turnstiles come in many different shapes and sizes. But, all types have, more or less, the same or similar features.

The basic setup has one cabinet on each side. The cabinets are connected with an invisible infrared beam. In the middle, two Plexiglas flaps meet at a single point to form a barrier.

If a person has proper clearance, the flaps will open to allow free passage. But, if they attempt to enter without clearance, infrared beams will trigger an alarm, and the flaps will lock. Also, the beams can count the number of entries or detect multiple simultaneous entries. Certain models come with three infrared sensors, while others can have up to four.

There are two types of optical flap turnstiles. The types vary based on the number of cabinets and entry points.

Two cabinets are great for confined areas that can handle only one gate. That one gate can function as both an entry point and an exit, depending on the needs.

Likewise, three cabinets are suitable for entrances that need two gates. The two-gate setup has a middle cabinet with flaps on either side and two side cabinets that have one flap each. In most cases, two of the cabinets will have readers and scanners, so they will function as entry points. Meanwhile, the third cabinet will be an exit gate since it doesn’t have a scanner.

Optical flap turnstiles are common in luxury buildings or institutions that need low-level security access control. Schools and colleges often use them because they seamlessly blend in with the interior. They are also common in libraries and movie theaters.

You can find optical flap turnstiles in corporate lobbies and government buildings. Since infrared sensors can count the number of entries, these types of turnstiles are useful on ferries, as well as at stations or in parks. Essentially, they can be used in indoor or outdoor settings. The stainless steel exterior can withstand both cold and warm weather conditions.