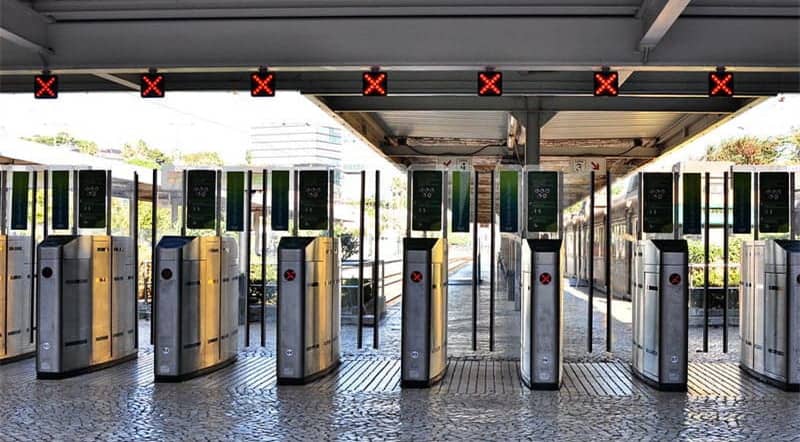 While we see turnstiles installed almost everywhere we go, not much is known about these security entrance gates. It’s not surprising that people often get confused when trying to understand their features and even end up misspelling the key terms.

If you’re still wondering whether it is spelled turnstile or turnstyle, you’ve come to the right place to know about these gates.

A gate built in compliance with the Americans with Disabilities Act (ADA) passed in 1990. These gates need to be at least 32 inches wide to allow people with physical disabilities to pass through using physical aids such as wheelchairs or walkers.

Designed to work with infrared technology in an effort to optimize and monitor the throughput of individuals entering or exiting a building. These turnstiles are equipped with arms that serve as physical deterrents, which intimidates potential trespassers while preventing unapproved passage.

The use of biological features, including face, retina, fingerprints, or voice, to identify and authenticate users.

A part of a turnstile that conserves the mechanism, arms, and other accessories.

An electronic sensor that reads a magnetic strip, bar code, or chip on an ID card. Card readers can be incorporated into modern turnstiles. When a card with valid credentials is scanned by a card reader, a signal is sent to the access control system, initiating the turnstile to unlock and open. Also known as a proximity card reader.

The practice of detecting when a person attempts to crawl over or under a waist-high turnstile. This is done with the help of infrared transmitters and receivers.

Detecting when someone attempts to crawl over turnstile arms to gain unauthorized access. This is done with the help of infrared transmitters and receivers, which are placed above the arms of a waist-high turnstile. Also known as climb-over protection.

Detecting when an individual attempts to crawl under turnstile arms to gain unauthorized access. This is done with the help of infrared transmitters and receivers, which are placed below the arms of a waist-high turnstile.

This feature refers to a locking solenoid and an electronic interface panel with modifiable time control.

When in the failsafe mode, a turnstile will release all locks or the barriers will draw back to enable egress during an emergency such as a fire or a power cut.

When in the fail-secure mode, a turnstile will ensure that there is no use within the unit before locking down to maintain security in all situations. This setting may come in handy in an emergency or a power cut.

This refers to the number of individuals that pass through a turnstile gate in a given period of time. Also known as throughput.

This refers to exiting freely or unrestricted exit through a turnstile, gate, or other access controlling barriers. Access control systems such as turnstiles are programmed to grant “free and unobstructed egress” during an emergency by law as mentioned in OSHA 1910.35. Without free egress safeguards, there is a risk that an access control system will trap people during emergencies.

A turnstile setting that is locked on entry into an establishment. Valid credentials are needed to enter the facility.

A turnstile setting that locks upon exit from an establishment. Relevant credentials are needed to exit the facility.

The D-shaped arm of a loop arm turnstile.

A gate that can swing in one direction only to allow either entry or exit.

A means to monitor the passage of every individual entering and leaving a facility. These turnstiles do not present a physical barrier.

Infrared beams that detect whether a person or object has passed through a turnstile’s lane and the direction it went in.

The act of following someone through an open door or other restricted access points without authorization or valid credentials. Also known as tailgating.

A contactless smartcard which can be read/detected without inserting into or swiping through a reader device.

Integration between an identification reader and a turnstile.

A waist-high turnstile with three arms that act as physical barriers and can spin in one or both directions.

An entrance control gate that makes it possible to track and control entry into and exit from a secured area.

A gate that can swing in two ways to allow entry and exit. Also known as bi-directional.