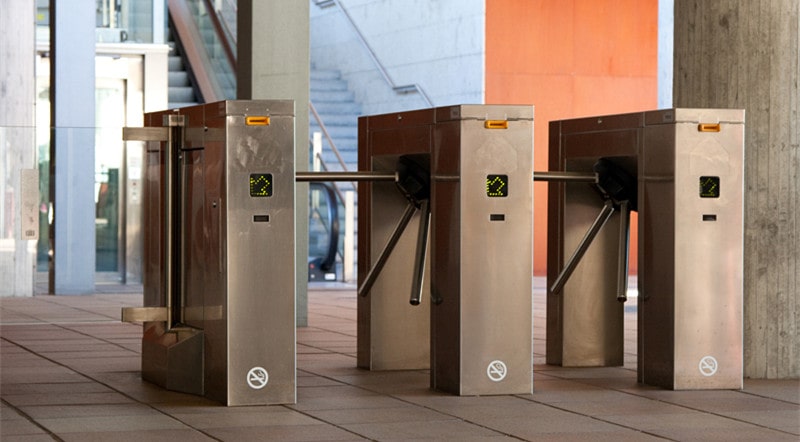 Features that come with tripod turnstiles are truly flexible. You can place a turnstile on any entry point, and it will control the flow of people seamlessly. In that case, you are using the turnstile as a standalone gate that can work by itself.

But for added security, you can integrate it into your existing security system. That way, you’ll have total control over entry points. The level of control will depend on the access control device that comes with the turnstile.

What Is an Integrated Security System?

Integrated security systems provide the highest levels of security. That’s why banks, government buildings, and data centers often have them. Within such a system, all cameras, computers, and gates work together to prevent security breaches. Most often, security guards will keep an eye on the entire system from one place.

Tripod turnstiles are a common part of most integrated systems. Some models are made specifically for that purpose.

Tripod turnstiles play an important role in a closed security system. Since they work as barriers on entry points, they are the first line of defense. Controlling who passes through the gate is vital, and turnstiles do the job well.

In general, your turnstile will have to be connected to a network to work as part of a system. But, not all models come with that feature. In most cases, you’ll need an IP-based turnstile to be able to connect it to the network. That means your tripod turnstile will have an IP address like any other computer.

But, the most important part of a unified turnstile is the access control device. In most cases, that device will be part of the network and not the turnstile itself.

Integrating your tripod turnstile into the network might take some work. Most security systems have central servers that the turnstile’s access control device can connect to. The setup also calls for a database of authorized people.

Next, authorized people will need to have credentials that they can scan on the turnstile. Most often, credentials come in the form of an RFID card. When a person scans the card, the device will check the database to see if the person has clearance. If so, the server will send a signal to the turnstile to open the gate.

RFID readers are the most popular kind of access control devices. But, nowadays, turnstiles can be fitted with fingerprint and face scanners. In that case, you would need a database of fingerprints or facial features instead of IDs.

On top of that, you can use security cameras to track each entry. For added security, you may want to use software that can spot tailgating. If the computer senses that two people are trying to enter, the turnstile can lock instantly.

So, tripod turnstiles can integrate with existing security systems flawlessly. The possibilities are endless, and the setup will depend on your security needs.