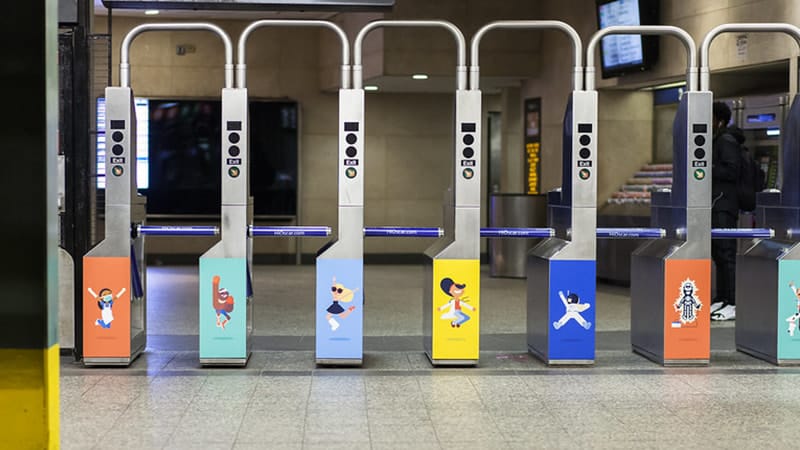 Subways are among those public places that typically experience a horde of the crowd on a daily basis. Managing the vast number of people and ensuring security here can be a challenge. However, subway turnstiles can make things easier.

What Are Subway Turnstiles?

A subway turnstile helps not only with crowd control in subways but also assists in checking passengers’ travel tickets. Depending on the assessment of different variables such as throughput and the degree of risk for each station, subway turnstiles may be installed at the entrance(s) and exit(s).

The most commonly used subway turnstiles are waist-high turnstiles, tripod turnstiles, full-height turnstiles, and optical turnstiles. All these functions electronically.

Waist-high or tripod turnstiles come equipped with card readers and are typically installed in low-risk areas. High-risk subways stations can be installed with full-height turnstiles to prevent people from riding without tickets. Optical turnstiles come with retractable barriers and are used in upscale terminals due to their modern and aesthetic design.

As mentioned, subway turnstiles are used at entrances and exits to check passengers’ tickets. These turnstiles offer several benefits, including:

Just like most public transport spaces, subways also have access control and security challenges to address. These concerns stem from factors such as multiple entrances, heavy footfalls, and changing traffic patterns.

Activities such as processing tickets and getting passengers to the right terminals in time for their ride are crucial to avoid delays and backup. Ensuring this becomes extremely difficult during rush hours and creates several loopholes in the system.

Subway turnstiles are necessary installations as they provide a fully automated means of checking travelers’ tickets while blocking unauthorized entrants. Checking each person’s ticket manually can be error-prone and time-consuming.

It makes sense to install waist-high turnstiles or tripod turnstiles to manage high volumes of the crowd. These subway turnstiles organize the traffic flow to count the number of people and/or collect payments/tickets. They are designed to withstand high traffic and even abusive conditions towards the security hardware.

As the name suggests, full-height turnstiles extend from the floor to the ceiling and are near-impossible to breach when locked. This makes them perfect for use at high-risk stations, where trespassing is frequent. When activated, the rotor rotates to allow only one person to pass through.

It is impossible for anyone to climb over or go under these subway turnstiles. Hence, they make for a robust security solution in subways, stadiums, metro stations, manufacturing plants, distribution warehouses, and parking areas. The issue of tailgating becomes virtually non-existent with the installation of these gates.

These subway turnstiles are used at stations that experience extremely high traffic. They function by using optical lasers to detect people with their swinging, retracting or drop-arm barriers, and are highly effective in detecting tailgating.

Optical turnstiles deter and detect unwarranted entry due to their ability to sense movement during the passage. These subway turnstiles are also equipped to alert security personnel so they can act on the trespassers promptly. They’re suitable for use at any public/private venue that boasts a modern architecture.

Regardless of the type of subway turnstile that is installed, they will all help station authorities save money by eliminating the need for extra manpower. More importantly, these sturdy electronic gates keep traffic controlled and secure. Which one are you considering for your establishment? Let us know in the comments section.