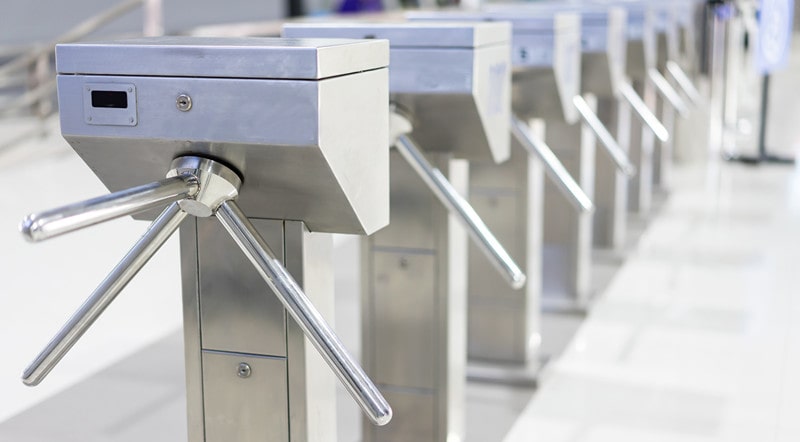 A tripod turnstile is the most versatile and most affordable kind of turnstile. Because of its simple design, you can easily place it on any kind of entry point. But, they have one major downside — tailgating.

Tailgating often happens in metro stations or other places where people have to pay before entry. To avoid paying, a cheater will walk behind someone who has paid and pass the gate before it closes.

In other cases, tailgating is not intentional. Co-workers will often help each other out by holding the gate open. But, unauthorized people can use similar tactics to gain entry to restricted areas.

Infrared sensors work in a simple way. If a person stands in front of the beam while another person is entering, the system will flag that as tailgating. Also, tripod turnstiles aren’t only susceptible to tailgating. People can easily climb over or under them. To mitigate that problem, some models come with infrared sensors above and under the metal bars.

But what if a person climbs over the turnstile without triggering the sensor? When people climb over turnstiles, they often place their hands on the cabinets. So, cabinets can be fitted with pressure sensors to detect when someone is climbing over.

On top of that, you can connect your tripod turnstile to a security camera and let a computer watch out for tailgating. That would also be useful in cases of piggybacking. But, you would have to integrate it with special software that can recognize and count the number of people entering.

The locking mechanism of a tripod turnstile works in unison with access control devices. In general, only people with proper credentials or purchased tickets can pass through the gate.

One of the most obvious ways a tripod turnstile prevents tailgating is by locking itself. When the rotating bars make a turn, the locking mechanism will kick in and prevent further entry.

But, some models come with additional locking features. For example, you can set a timer to how long the gate stays unlocked after someone gets access. Typically, the gate will stay open for about five seconds. If the person doesn’t pass through the gate in that time frame, the gate will lock itself.

Also, most tripod turnstiles have locking mechanisms that prevent reverse entry. But, if the gate is bi-directional, passage from both directions is possible.

Visual or audible alarms are a great way to deter tailgaters. If the infrared sensor detects two people trying to pass through the gate, an alarm will be triggered. Sometimes, tailgating is not intentional. People are often in a hurry, so they tend to stay close to each other. If that happens, the alarm could just signal that someone is standing too close to the gate.

In other cases, alarms can alert nearby security officers that an unauthorized person is trying to pass through the gate.