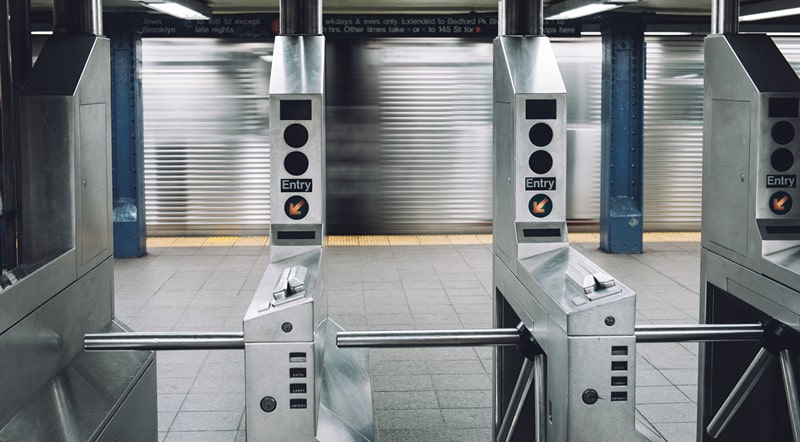 The concept of tripod turnstiles hasn’t changed much over time. As technology evolves, turnstiles only get upgraded. But, the core features have remained the same.

So, why are turnstiles so popular even today? They are durable and reliable in the long run. Also, maintaining them is a breeze. Sure, they have some flaws, but they’ll get the job done in the end.

The reliability of tripod turnstiles has withstood the test of time. They provide medium to high levels of security, and you can find them in many places. Banks, sports stadiums, data centers — they all use tripod turnstiles.

To get an idea of why they are so reliable, we have to look at how they work in certain situations.

Single Entry at a Time

Allowing single entry at a time is one of the main uses for turnstiles. The core design prevents two people from going through the gate at once. That’s because the rotating metal arms block any tailgating attempts.

But people can easily bypass that simple security feature. Most often, they will either jump over the turnstile or crawl under it. To deter such activities, some models come with sensors and alarm systems. But, these systems alone might not be effective in public transport stations. That’s why sometimes security officers or cameras are needed to guard the turnstiles.

Even with these “flaws,” turnstiles are still the most reliable medium level security gate. They are versatile so you can place them basically anywhere.

The reliability of tripod turnstiles as barriers is obvious. The rotating metal arms are effective in controlling the flow of traffic. Not only that, but turnstiles can also regulate the speed at which people enter the gate. That will depend on how fast the arms rotate.

Most often, you can find tripod turnstiles in places that get lots of visitors. They are common at entry points in arenas and stations. So, tripod turnstiles are reliable when there is a need for crowd control.

Tripod turnstiles control crowds with narrow passage lanes and barriers. People can enter them only in an orderly fashion. There is no way of going around the gate, only through it.

Tripod turnstiles are also reliable in guarding restricted areas. In most cases, they have to come with access control devices for added security. RFID readers and fingerprint scanners are among the most popular devices. Their purpose is to allow access to people with proper clearance.

Also, you can integrate tripod turnstiles into an existing security system. That way, you can have other security devices — such as cameras — track every single entry through the turnstile.

Tripod turnstiles are also reliable in emergency situations. Most modern models come with safety features in case of a fire, for example. If automatic unblocking fails, you can simply cut the power, and the barrier arm will fall to a vertical position. That’s an example of a fail-safe feature that many tripod models have by default.