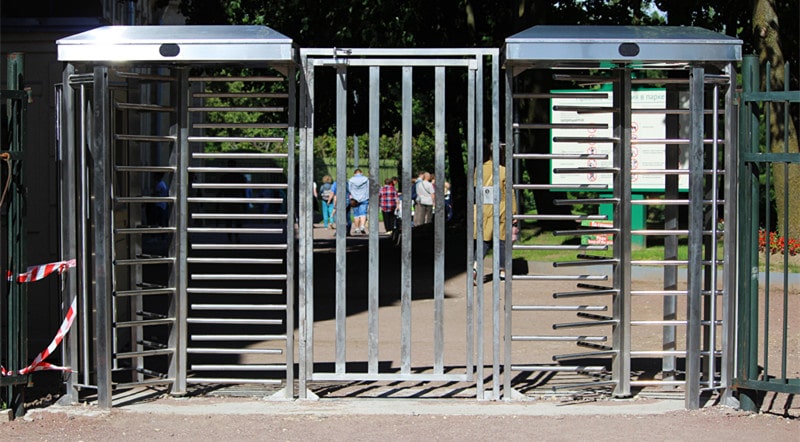 Turnstiles began their journey as farm barriers that allowed humans to pass through, but kept the cattle penned inside the fence. Over the years, however, turnstiles have become increasingly common in public places. You can see waist-high and full-height turnstiles in almost every area that needs to have access control.

Let’s find out a little more about how, why, and where full-height turnstiles are used.

Why Use Full-Height Turnstiles

Full-height turnstiles offer a few distinct advantages over their waist-high counterparts, making them more suitable for high-risk areas. These advantages include:

– Intruders can’t hop over a full-height turnstile as they do in subway stations or in public parks with waist-high turnstiles.

– As only one person can pass through this turnstile at a time, tailgating is impossible.

– Full-height turnstiles are vandalism-proof, so intruders can’t tamper with them to gain unauthorized access.

– Most of them come with operational flexibility, allowing you to choose between unidirectional and bidirectional traffic as and when needed.

– They can function seamlessly in areas where old-fashioned security measures cannot be used.

Where and How Full-Height Turnstiles Are Used

Industrial plants often need to protect a variety of assets such as merchandise, machinery, raw materials, and documents. As these assets are spread over a large area, protecting them with old-fashioned security is often expensive and inefficient.

This is why an increasing number of industrial plants rely on full-height turnstiles designed for use in indoor and outdoor areas. Industrial plants often install these turnstiles at various entryways, making unauthorized access near impossible. They also use them to keep count of the number of people that have entered and exited their premises.

The increasing security threats to public places like airports and seaports have led to increasing demand for full-height turnstiles. These turnstiles provide passengers with a self-controlled journey through the premises without relying on manual security checks. Thus, you can use these systems to increase passenger flow efficiency and lower security operating costs.

Most airports use specially developed full-height anti-return turnstile gates at border crossing points, immigration points, main entry points, and even in parking areas. They are often combined with other security measures such as x-ray scanners, biometrics systems, alarms systems, and boarding pass scanners.

High security in prisons is critical for maintaining the well-being of inmates as well as prison staff as they may house some of the most violent and dangerous offenders.

Most prisons and/or correction facilities use full-height turnstiles to build unsupervised access control for offices, buildings, and various other entryways. The vandalism-proof design is the primary focus when installing these systems as most prisons carry a significantly higher security risk.

These turnstiles often come with integrated electronic keycards or RFID cards slots, push-buttons, fingerprint scanners, and even face recognition access control systems. They open only for a few seconds, allowing just one person to pass through at a time. Any unauthorized access is immediately followed by an alarm to alert the authorities. It may also trigger a facility-wide lockdown.

However, they may also use them at main entryways in the building to control footfall. The turnstiles in vaults and restricted office areas are integrated with electronic keycard systems or biometrics, allowing access only to authorized people.

Most military bases are not accessible to the general public due to security reasons. However, they still do need to monitor on-site staff and authorized civilian visitors. This is where access control systems such as full-height turnstiles come in handy. They are often used in conjunction with card readers, biometrics, and ticketing systems at various outdoor and indoor entryways.